Hometown native, Wyatte wylie- is a fan favorite for many Silvetips fans. Wyatte (now age 18) and his older brother Wade Wylie, Started off speed skating when he was 7 and then moved to the famous ice-skates roughly a year later- and never looked back. Wylie started his hockey career in Everett, Wa where 2 years later he found himself in Dallas, Tx. Wylie then was drafted back to Everett on the WHL league instead of the U16 team.

Wylie would wake up at 4:30am every Saturday with his older brother and dad to head to Renton for “drop in hockey games” to play for approximately 2 hours. His parents Shelley and Todd Wylie, gave up a lot of sacrifices for both boys to play hockey. Wylie left the house at age 15 for a year to live in Dallas. Shelley and Todd were unable to make it to lots of hockey games as Wylie was on the road a lot in Canada, or California, Texas, etc… They tried to be their for a few games for each boy, but most games they watched were from their couch.

The Wylie family is a tight-knit family, but when both boys played elite level hockey, family time was spent Shelley with one boy, and Todd with the other. As many hockey parents know, hockey’s expensive especially at the elite level. But the Wylie’s had not 1 but 2 kids in elite hockey. Wyatte’s success has not come easy, as he started at a young age not intending to ever play hockey. At only 8 years old Wyatte laced up his skates, and off he hit the ice. Fast-forward 10 years later, Wylie is NHL draft eligible ranked at #71 and is playing his 3rd WHL season this coming September.

Wyatte you amaze us every single day, With your strength, hard work and dedication. We are so unbelievably proud of you always! We always told you to chase your dreams and if you put in the work good things would happen. You did just that! From the time when you were just starting to play waking up at 4:00am to watch your game we recorded from the weekend before to watching NHL games none stop to playing hockey with your older brother and his friends that showed you no mercy even though you were 3 years younger. You never gave up. When people told you that you would never make it out of Everett you proved them wrong! It made you work even harder and were more determined to chase your dream. We know you have a lot more to give, a lot more to show people and your future is so bright we can’t wait to watch it unfold! Stay humble and true to yourself and the Sky is the limit.
~Love Mom 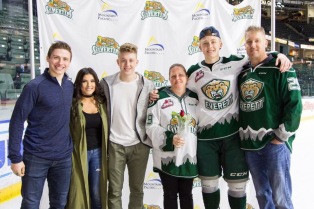 Images are not mine, Featured image credited to Chris Mast/Everett Silvertips

Thank you to his mom, Shelley for making this possible. Thank you to Wyatte for meeting with me today.

My name is Logan. I am a 12 year old hockey and lacrosse player. I have always loved hats, especially ones I have been able to personalize. HatTrick started when my mom and I were at the mall and she wanted a hat with a hockey player and my number. I designed a hat that became popular at the rink, and drove me to launch HatTrick Custom Designs.